The National Library of New Zealand is undergoing a redevelopment. So we're being packed off to various locations around Wellington. Good thing (bonus?) is that I finally get a PC upgrade out of this. 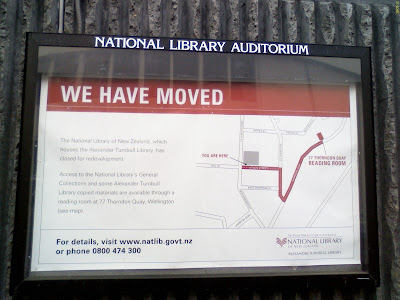 Packing up the old office, 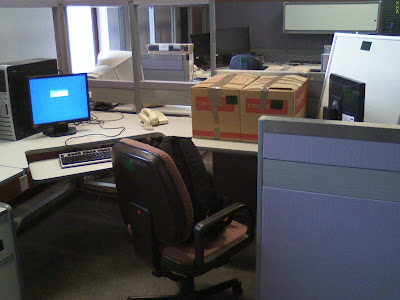 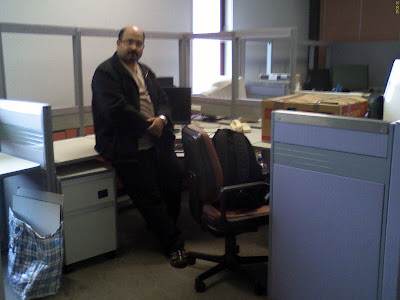 and moving to a new one, arrow marks the new desk location 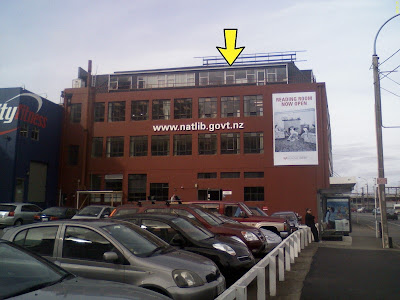 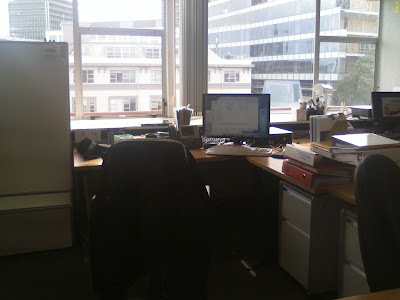 with a view to match. Will finally be able to take breaks to focus eyes on something distant - a big hazard for IT guys. 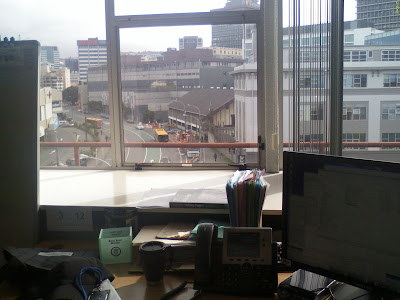 Posted by Aditya Prateek Anand at 10:41 AM 2 comments:

Email ThisBlogThis!Share to TwitterShare to FacebookShare to Pinterest
Labels: 2010, work

Popular image and video presentation option Cooliris has come out with a new method of showing their 3D wall of images. Now the gallery can be embedded into a web page as a component. See my example below, showing images from an event some years ago


Posted by Aditya Prateek Anand at 10:10 PM No comments:

It's amusing to discover where words come from. Apparently,

UBS’s SFr2.7 billion ($2.5 billion) loss for the year activated its malus (Latin for “bad”) system of accordingly reducing an executive’s bonus (“good”). Separately, the $9m in deferred stock awarded to Lloyd Blankfein at Goldman Sachs was taken as a sign of pay restraint on Wall Street. Jamie Dimon, of JPMorgan Chase, received $17m.

Posted by Aditya Prateek Anand at 7:18 PM No comments:

Hurtling along at great speed into a globally technology-connected future, conditions are set for localised cultures, that depended on their isolation, to evolve out of existence. Now BBC passes on the message from Professor Anvita Abbi of Jawaharlal Nehru University, that Bo, one of humanity's oldest languages has vanished into history, with the demise of it's last speaker. This language used to exist in the Andaman and Nicobar Islands of India which, as the map below (from andamanese.net) shows, has undergone drastic demographic change. 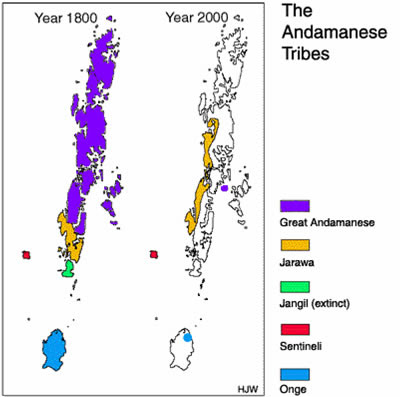 I remember a documentary my family saw in the 1980s on these islands. The documentary-maker-explorers described the tribals as easily provoked and very dangerous. Standing on the ships off the shore they would wave food parcels and gifts to the nervous bewildered tribals, who kept their poison-tipped arrows poised. Not very different from the meeting of cultures portrayal in the latest Avatar movie.

Times will change and cultures will transform, but in an age where audio and video recording of every expression is possible, the heritage can be preserved to some extent. Prof. Abbi has done a lot of work in this direction recording the exact phonetics as well.

Boa Sr, who died last week aged around 85, was the last speaker of ‘Bo’, one of the ten Great Andamanese languages. The Bo are thought to have lived in the Andaman Islands for as much as 65,000 years, making them the descendants of one of the oldest human cultures on Earth.

Boa Sr was the oldest of the Great Andamanese, who now number just 52. Originally ten distinct tribes, the Great Andamanese were 5,000 strong when the British colonized the Andaman Islands in 1858. Most were killed or died of diseases brought by the colonizers.

- www.survivalinternational.org
And, sadly this will not be last language to disappear in the region.

- www.andamanese.net
A useful description of how to identify languages on the path of fading out is in a paper by Prof. Abbi and colleagues:

Moribund languages are characterized by lack of will to learn and teach the heritage language. The language does not get transferred from the older to the younger generation. Another important feature of the moribund languages is loss of registers and reduced domains of use. In the restricted domains that the language is used show traces of earlier varieties in lexical items and grammatical structures once spoken. The loss of various registers also results in the lack of total mutual intelligibility even among the speakers who have retained the language.

- Where Have all the Speakers Gone? A Sociolinguistic Study of the Great Andamanese, by Anvita Abbi, Bidisha Som and Alok Das, Jawaharlal Nehru University, New Delhi. PDF file
Posted by Aditya Prateek Anand at 7:14 PM 1 comment: