Google bomb: from Bang to Fizz 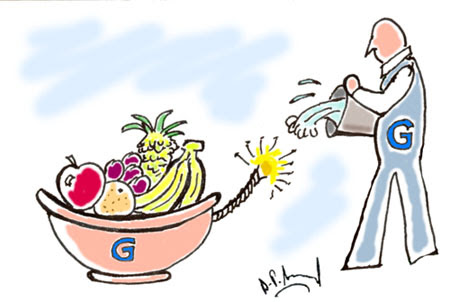 It took an entertaining event to bring this concept to my attention. All of you know how when you search for something on Google you get a list of results. Now, what comes at the top of that list tends to get associated with that search. So, if you search for apple on Google, what do you get? The local fruitseller's location? No way - the whole list shows links to Apple Computers Inc., the famous seller of iMac, iPod etc. In the internet world this may seem all right, but for a non-technophile this is ridiculous.

These lists are formed by Google's programs based on their analysis of the web (see, I'm not referring to a spider's web). One of the program's methods is to analyse all links (the words with underlines below them, which on clicking lead somewhere else) and where they lead to. So now the Google program has found that the majority of 'Apple' links lead to the company. This causes Apple Inc. to appear top of the Google results list, rather than say 'apple' which leads to a shop where you can get apple products.

Such distortions or conflicts are happy ground for the techies with a sense of humour. Now, they realise that if several hundred of them (at least) set up a bunch of links over several web pages that they control, such as set up 'orange' which points to Apple Inc. this will help shift the Google search on 'orange' to show Apple Inc. at the top of the results list. This is a Google bomb.

Now, the entertaining event. Some time ago, several wits got together and decided that let's create links all over the place to connect to the official George W. Bush biography from the US White House web site with a couple of words. And the words chosen? - 'Miserable Failure'. So now if you, for some reason, were to write 'miserable failure' in the Google search box, you will get the white house as the first result in the list. No kidding! There are more details on this here.

Show's over. All these had been working since 2004, but apparently changed recently when Google has reworked it's programs to avoid this discrepancy. So now, if you were planning to create your own google bomb, you'll have to find some other way.
Posted by Aditya Prateek Anand at 3:33 PM

good post ed, i remember when you typed in weapon of mass destruction and google popped up this really funny error page, i presume that Google does this delibrately.