What is a browser?

Living in our digital ivory towers, it is easy to forget how disconnected we technocrats are with the general public. Many of the concepts and jargon that comes naturally to us is just unintelligible to most. Here, Scott Suiter, a former Google intern explores if people know what a browser is ...

This has been building up for some time. Google army of talented devleopers has been gradually pushing into areas of desktop computer applications. Google has Office suite - Google Docs, Browser - Chrome, Email - Gmail and I can keep going. In fact, I find that most of my computing requirements can now be covered by some form of Google service. As a software developer, I find that many of the online platforms and components are also being rethought and launched from Google. Now to support all this from your desktop/laptop is the first explicitly declared Google Operating System for personal computing (they already had Android OS for mobiles) - Google Chrome OS.

.. So today, we're announcing a new project that's a natural extension of Google Chrome — the Google Chrome Operating System. It's our attempt to re-think what operating systems should be.

There's no rush, it won't be available for over a year from. In Apple-reminiscent marketing-style they are trying to capture mindspace. Microsoft's next OS Windows 7 is due to be launched this October. Both these companies know that the key to sustaining the size of their businesses depends on being able to position themselves as the portal to computing and online experience. Microsoft controls PCs, Google dominates the online experience - both are trying to extend their dominance into the other's arena as these are merging. So far, Google has been making inroads into Microsoft's turf, but not vice-versa. An interesting point from TechCruch:

The free OS, OS based on the net, and netbooks are concepts that have been visited unsuccessfully before - the future direction is not a given. Final word from the Economist:

Yet it is much too early to count Microsoft out. It recently launched Bing, a new search service, which has taken some market share from Google. In October, roughly when Google will make Chrome OS available, Microsoft will release the next iteration of its operating system, Windows 7, a version of which is supposed to run well on netbooks. And the firm is spending billions on a “cloud”, a global network of huge data centres, which will rival Google’s infrastructure and allow Microsoft to offer all kinds of web-based applications.

Will there be a clear winner? Probably not in the foreseeable future. The pockets of both firms are simply too deep. And that is a good thing: the epic fight between the two giants promises to speed up innovation. And that is what the IT industry needs to overcome the recession.

A colleague also showed me a prescient cartoon from Frederico Fieni 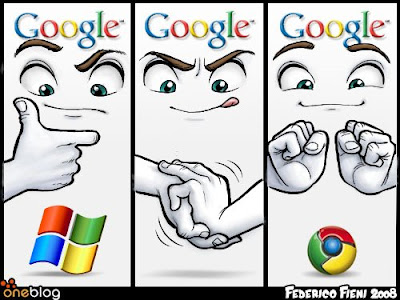 Posted by Aditya Prateek Anand at 10:19 PM No comments: