Walking through the local book fair, last weekend, I couldn't shake off the eerie feeling that in a few decades time this might be considered an antique market. EBooks (electronic books) are catching on in a lot of environments and are proving to be remarkably accessible and convenient. Already my eBook collection surpasses the physical one without affecting the number of boxes I store in the garage.

I also felt the quantity of people visiting the fair to be less than in previous years, perhaps that's why the organisers raised the prices of the items. I can't really imagine inflation to be a factor when dealing with old books.

My usual brief is to head straight for the Computers/Technical books section and pick up relevant copies of editions that are not obsoletely old, then head over to the science fiction area and see if anything catches my eye. After that it's a general stroll through the other sections.

In the fiction section I used to pick up a lot of Tom Clancy and Robert Ludlam's quick read books, but finally time has caught up with them. The stories are based in, and dealing with, the Cold War - the plot tries to reach the reader by making him worry about the US-Russian nuclear standoff and the great spy games being played across the geopolitical chessboard. I used to really enjoy these tales, but the end of the Cold War was has cooled my enthusiasm. There were boxes and boxes of such paperback novels, lying untouched, unbrowsed. Time has passed these tales by and they, along with their authors, may be forgotten. Some, like the Robert Ludlam's Jason Bourne series have been adapted into movies with story-lines mutated into a more modern context, having little reference to the Cold War or the original story.

A generation ago, the same thing had happened to World War II tales, with comics like 'Commando', and during/post-war Nazi conspiracy fiction.

The quick rate of environmental change is reducing the shelf-life of cultural expressions even further. Is there anything that would make a book truly timeless?

Shown below is my part of the haul this time. We took a half-empty box of only select books to the pricing counter, where they pointed out that a whole box is equal to a half box in price. We promptly went back for another round and managed to stuff a large box with extra books that were previously secondary considerations. This time, the heavy box shook the pricing counter. 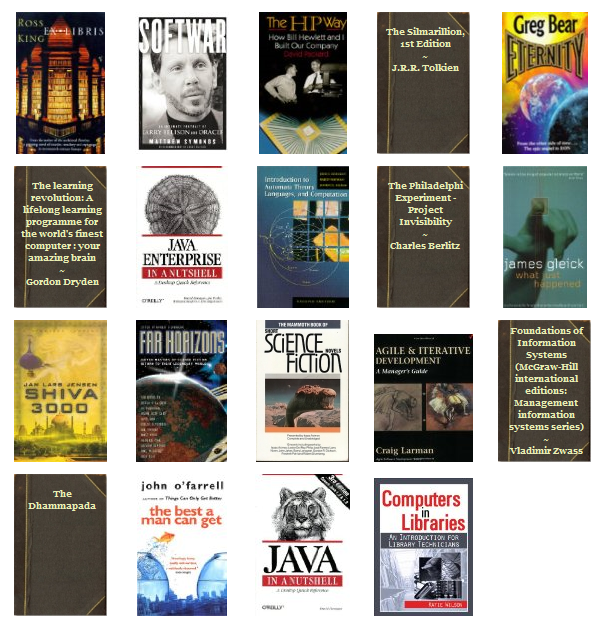 Posted by Aditya Prateek Anand at 9:59 PM No comments:

My law firm, sends out a useful information newsletter every few weeks. This time they have covered the topic of employee screening. There are some important tidbits worthy of note:

Recent media reports have shown an increase in cases of employee fraud. This may be due to the greater financial difficulties people are facing during the recession. ...

One important way to reduce the risk of fraud by employees is through the pre-employment screening process. ...

Some employees are even screening prospective employees by “googling” them or looking into their Facebook or other social networking sites. Often these can provide an insight into an employee that they may be reluctant to reveal at an interview.

Here's a law firm confirming it - your online profile matters more than you think, and with sites such as Facebook disrespecting their users' privacy and opening up their details to the public web, it pays to be mindful of what you put up online. The web is a reflection of the real world, and not an escape from it.
Related post:

Posted by Aditya Prateek Anand at 11:28 PM No comments:

Unimaginable that any website would be a more visited online destination than the ubiquitous Google. However, in U.S. where the online revolution began, it seems that the social website Facebook, which also contains its own application platform, now attracts more internet traffic than Google.

The rise of Facebook according to the graph, has been spectacular. I've noticed that friends which until recently I found only on other platforms such as Orkut (popular in India) and Yahoo are now to be found in Facebook.

Facebook was launched just in 2004, for just Harvard students, then expanded outwards in later-2006 to anyone holding a valid email address. At that time myspace.com was the leader site in online personal web pages, and the two became rivals. Myspace allowed its users to design their pages in any way they liked, while Facebook kept control on the look and feel. This ended up making myspace a very wild and noisy online space filled with the participants' creativity, but confusing for the casual user. Facebook reduced your design choices, but that made it simpler and recognisable. Myspace has reduced in profile, but still popular among musicians and artists. Now, Facebook has moved far beyond myspace and seems to be competing with status-update micro-blogging site Twitter.

In 2007, Facebook launched a platform, f8 for creating applications that ran on its website. There was also an associated Facebook Markup Language. This allowed developers to create their own games and experiences that user could share with each other on the website. The experience moved beyond simple communication between community members to participating in shared activity. This can be very addictive especially where elements of competition and public achievement are introduced into the application, such as in multi-player games. This is especially helping to keep people locked into the Facebook website.

While Facebook has no hope of beating Google as a way of searching on the web, the shift in traffic share, does mark a change in the way people are now using the Internet - to participate in communication and shared experiences rather than a convenient source of information.
Posted by Aditya Prateek Anand at 10:09 PM 1 comment: