Here's another interesting Firefox extension to navigate the plethora of tabs we open up in our browsers these days. It seems to offer the best visual special effect options in executing the transition between different tabs. A combined thumbnail view also allows the user to see what is in each of the tabs. A good thing is that by default it opens up inside your browser and doesn't take over your whole screen. That is, unless you want it to.

Among the effects are

A better explanation is in the video below

To get this add-on for your Firefox go here:
https://addons.mozilla.org/en-US/firefox/addon/8879

Hmm ... come to think about, ideally the best and most useful tab navigator is one that navigates the brower tabs and the open applications in one interface. It would require combining the browser system with the computer operating system with some stylized transitions. Let's see if anybody comes up with that one.

Posted by Aditya Prateek Anand at 9:04 PM No comments:

Another day to remember. An august gathering hosted by the High Commissioner of India for the visiting Indian cricket team in New Zealand. A pleasant dusk evening enhanced the outdoor setting.

The Indian cricket team has been visiting New Zealand again after a gap of over 5 years, and the changes have been significant. Led by a dynamic new captain, the team has found its confidence and has been performing phenomenally. In 2003-04 a tired Indian cricket team had been more or less steam-rolled in New Zealand. Not this time. It is the 'Black Caps' who are struggling to form a response.

The New Zealand media has been labelling this tour as a visit from 'Rockstars of Cricket', acknowledging the enormous following and gravitational pull of the Indian cricket scene.

Having met the Indian team in 2003-04 and now, the change in demeanour and body language is clear. The players seemed happier, more willing to mingle with others, less tired and clearly confident. Its always amazing how young some of these guys are. TV certainly makes them look 10 years older.

Here are some photos from the gathering. 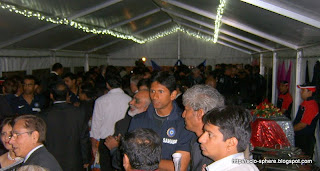 The gathering, Bowling coach Venkatesh Prasad can be seen in the centre. 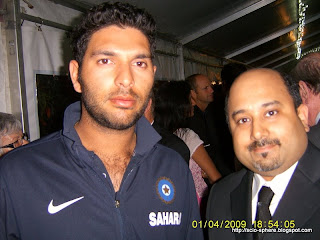 With Yuvraj Singh, one of the best international all-rounders and 20-20 star. 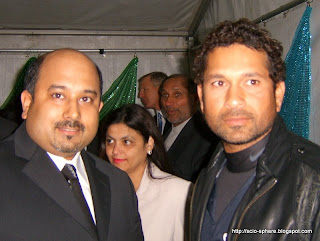 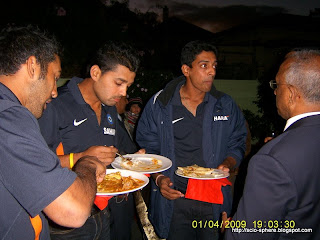 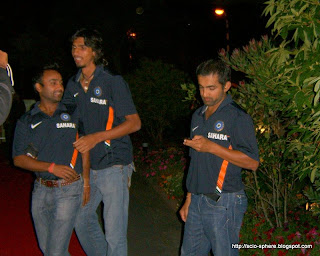