I mentioned in my last blog that the huge price difference between Academic and Normal versions of Microsoft Office Professional 2007 Suite is just waiting to be exploited. Now here are examples of individuals making profits off the inflated price of the Microsoft Windows Vista Ultimate Edition.

The following is a screenshot of ongoing auction on Trademe, considered New Zealand's most popular website. 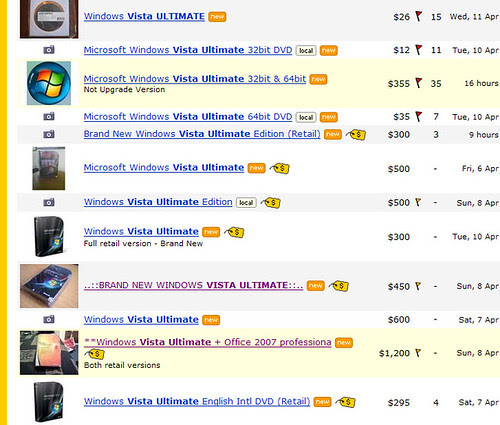 So why are they selling it, instead of using it? Apart from the obvious profit motive, here's samples of what is described on Trademe:

"Picked this up at a Microsoft conference and have no need for it."

"I won it at a product show and I cannot use it as it needs a better computer than what I have."

"Purchased and realised it would run in the computer but with limited feature so decided to sell - make sure you have good system."

Most users don't want half-baked versions, they want everything available under the brand. Vista is a much better version of the Windows operating system, with a lot of nice features for monitoring and enhancing PC performance, not to mention the updated look. Everybody wants Windows Vista Ultimate with all the features working on their current computers. Microsoft is propagating, if not highlighting, an economic class-structure of users. And who doesn't want to climb a class-structure?

The price of Vista Ultimate in the New Zealand market is listed by Dick Smith Electronics is nearly NZ$1000. Now that's much more than you would have to pay for a current above-average configuration desktop computer or an average configuration laptop. Consider in India, it costs above Rs. 30,000, an amount many times the monthly salary for most Indians.

Vista is also working very hard to avoid piracy at all costs. I would really like to see that succeed, because if Vista becomes hard to get at anything less than the full price, people will start discovering the joy and freedom of using Open Source operating systems such as Linux. Sun Microsystems has also recently released a free version of the Solaris operating system. There are going to be exciting times ahead. There are many agencies, including the United Nations, advocating free open source software alternatives especially in economic vulnerable areas such as found in developing countries. High costs don't help the Digital Literacy Divide.
Posted by Aditya Prateek Anand at 1:35 AM

excellent cartoon considering you can get a better OS ahem "OS X" with 10 times better features for around $300 bucks. M$ better start pitting diamonds on the Vista $Ultimate$ Cd.