Skywalks that leaves you hanging, and other unfriendly tourist spots

After hearing news reports on the BBC, about a new tourist attraction on the Grand Canyon, it became one of those places that I'd like to see someday. It's a glass semi-circular path suspended above the Grand Canyon, which you can walk on and see your feet floating over an immense spectacular abyss. The height at which you'll be is higher than the skyscrapers of New York. 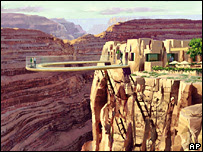 But then reading one of the first blog reports of someone who's actually been there, I would need to do a rethink. Among the many disppointments described, ticket costs turn out to be far more than advertised, and strangest of all you are not allowed to take your camera. Apparently it can "fall and crack the glass" !!??

I never understand the logic of such a rule. A 2-dimensional photographic representation hardly robs prospective tourists of the true in-person immersive 3-dimensional experience. How many copies of the 'Mona Lisa' painting must you have seen everywhere? However, that does not stop a huge number of tourists scrambling to get a brief glimpse of the real thing at the Louvre Museum in Paris.

Akshardham in New Delhi is also such a place - a magnificent example of revival of traditional Hindu architecture, funded by India's new money. Last December of 2006, my Dad finally took us all there, overriding my objections. Walking through the place, you can't help but feel that you have traveled to an ancient era in Indian history when the ancient monuments were new. The place is organized more as a theme park than a place of worship, but still you can't take photographs. Being a collector of memories and enjoying reliving my experiences using photo or video, I find this very irritating. Even more annoying was the process where you are frisked and for dubious reasons, have to leave every single electronic gadget the uneducated security can identify. It's tighter than airport security, they didn't even allow my usual pocket USB thumb drive through! You are not allowed to take your cellphones, so if you get separated from your loved ones in the immense crowded temple complex (it can have upto a 100,000 visitors a day), then God help you.

There are many museums and galleries that don't let you take your camera, even though they allow cellphones. But then, what happens to cellphones which have cameras? Here's another challenge of modern convergence technology - how will you identify it and how will you control it.

In my view, in the emerging modern paradigm, the new human is (or will be) permanently plugged into a communications and information network and the devices enabling these are part of a personal identity. Any attempt at separating these from the person would be in a way a violation of human rights. If a copyright or security rule is to be implemented then mechanisms for these should not interfere with this enhanced personal identity. A person can be made aware of the rules and the responsibility should be passed on to him or her to follow the instructions.