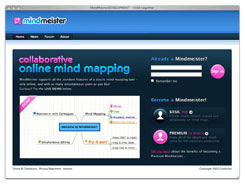 Just a few years ago, many computer technology gurus thought that delivering Rich Interface applications, such as Office applications online was not worthwhile. That the interaction would be very limited and the online application would not provide a satisfactory response time. Now with broadband, tecnologies such as AJAX and applications such as Google Documents that door was been thrown wide open. One of the latest, an online mind mapping service, Mindmeister, has just been launched. I had been involved in testing the beta version and recieved the following email on May 2nd, 2007:

" We are very proud to announce that after a thorough private beta phase MindMeister finally went live last night at 11pm CEST!"

The free basic account lets you create upto 6 mind maps, to get unlimited you'll have to go premium. Mindmeister includes a Web2.0 component by allowing you to share your mind maps with others and work collaboratively. 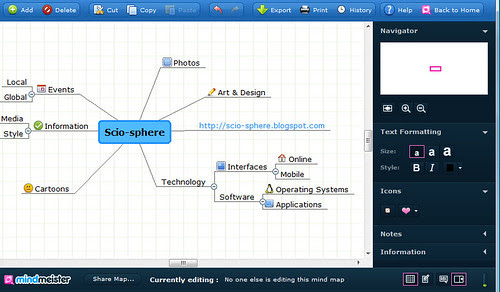 The premium account also additionally allows the user to export the mind map in formats such as FreeMind and Mindjet Mindmanager, the user can include the map in blogs and websites, kill the advertising, and provides full SSL encryption.

The limit of this application to just 6 mind maps for free is against the spirit of the times. It severely limits any true usability for most users and will hamper the success of this endeavour. Perhaps sometime in the future, the boys with the big cash - Google or its equivalent - will buy this company out, set the application free with unlimited storage and unleash its true potential.
Posted by Aditya Prateek Anand at 5:27 PM

now its a really good idea, any way if you are thinking what i am thinking there is no way you set this application. Do you realise what an online application like this is capable specially with SSL encryption. Banks will have a field day with this one. Your library can kick away the Dewy Decimal System. You will be able to have live meetings sitting at home where each user can have input live. Hell no i would expect a software like this to be free, Where is apple why havent they bought it yet and made it proprietry :P