The end of Bangalore

What I was afraid of has finally happened. As part of a patriotic and anti-colonial posturing by the oh-so humble Indian politicians, another city (my old city) has lost its identity. Bangalore has been renamed Bengaluroo. Hmm ... doesn't that sound like the capital of West Bengal? 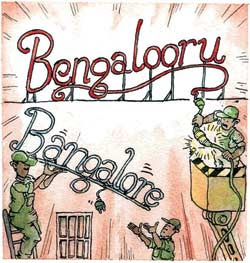 Bangalore was a name which I loved because it packed a phonetic bang. "Bang-a-lore" I would sing riding around on my trusty motorcycle. When I first arrived in Bangalore, the head of the state goverment was Chief Minister Bangarappa (Bang-a-rapper?). I got my college degree from 'Bangalore University' a name that's known internationally. Believe it or not, Bangalore is an globally recognized (pronounce-able) brand associated with the information technology revolution of India. Due to its loss, the city will take a hit. 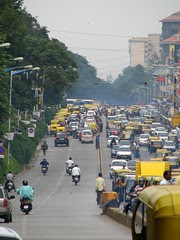 It's even funny to know what Bengaluroo may actually mean. There's a popular story that a king from the Hoysala dynasty, while on a hunting expedition, stopped for a meal break and was fed boiled beans by a kindly old lady, and thus he named the old hamlet after that dish - benda kala ooru (in Kannada), the village of boiled beans. However some historians seek to console us that it's not true and that the name actually derives from some specimen of flora.

Indian cartographers have been tearing out their hair vigorously for the past decade or so. Trivandrum became Thiruvananthapuram (even Indians have problems saying that out loud). Bombay (now, did't that sound explosive) became an uninspiring Mumbai. Madras became Chennai (which sounds like another food item). Calcutta became Kolkata (in Hindi that would sound like 'I bit [something] yesterday'). And I haven't even started discussing individual street names yet.

"But it's all the Britisher's fault", protests the Indian politician, "because they couldn't pronounce the Indian dialect, they twisted it into a English sounding word". Granted, but that does not mean that you are doing anyone favours by renaming these cities 40 years after Independence. When the true generation of Indian freedom fighter did not have any problem with these names, why do you?

These names have become identities or brands in their own right, with long histories. A Bombay or Madras does not get located in Britain because of its name. There are no other places in the world with theses names. These names also belonged to India, in fact the India of your fathers and grandfathers. Bangalore had been named thus since 1537.

The politician thinks he or she can go down in history as the person who got the city's name changed. Let me tell you - history doesn't care. In another 100 years your contributions will be judged on other criteria. And what would happen if other politicians got the same idea? Even worse, what would happen if the latest pundit, numerologist, psychic or guru-ji decided that the current name is 'cursed with bad luck'? Well, we'll go skipping along singing another name-changing tune.

See also article in the Economist

Posted by Aditya Prateek Anand at 3:08 AM

Thoroughly enjoyed your piece on 'name-games' in India - before break-fast. I quote from a letter dated 10th Dec 1949 from Lucknow (no change in spellings yet!) by Indira Gandhi to her Papu - " I hope Farrukhabad was not too dusty and tiring. I hear Tandonji (Hindu-minded Congress leader backed by Patel) wants to change its name and that of every town which ends with 'bad' into 'nagar'. If this sort things goes on much longer,I shall be provoked into calling myself' Zohra Begum or some such thing!"

So what is in a name? Changing it is an old game!

Thanks for reminding Bangalore.
Nice reading.
Fully agree with you. These Politicians are killing
the cities.

I wonder if these politicians even realise the implication of their actions.. then again, maybe they are drafting a letter right now to the Mayor of Christchurch to change the name of Madras Street

Haha. This shit's so stupid. I'm with you the whole way.

I wonder when the fucked Indian government will try to stop going in the reverse generation. They're trying sooo, soooooo hard to be as uncivilized as possible.

Did you hear yet about the fact that they've banned dancing at the clubs here in B'Lore? (Always Bangalore to me, no Bengal-ooroo shit for me, plz) Pissing off how a whole government can be orthodox and slow to catch up with some common sense!

I'd like hear what you have to say bout all this. :)

Sorry for the bad words. Can't help but get a lil riled up over all this.